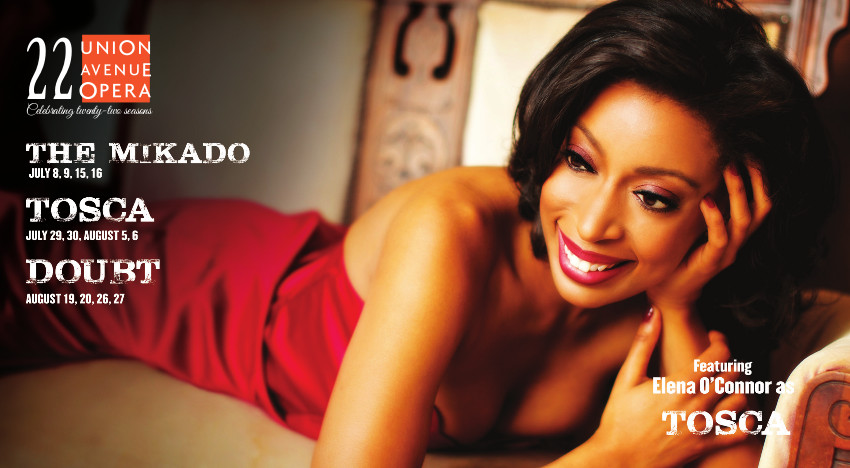 Oh how complicated love can be! Nanki-Poo is desperately in love with Yum-Yum who happens to be betrothed to the new Lord High Executioner. Ko-Ko must find someone to execute or it will be his neck on the line. Will a case of mistaken identity save the day as these two conspire – or will heads roll? Witty lyrics and a topsy-turvy plot make this light-hearted tale of forbidden love and trickery a story that reaches beyond traditional interpretations. Widely regarded as the finest Gilbert and Sullivan operetta, The Mikado will captivate and delight at every turn.

Click here to meet the cast of The Mikado

Presented in English with projected English supertitles.
UAO’s production of The Mikado is being updated and will be set in a 1920/30’s style gentlemen’s club. No actor will appear in yellowface for this production.

Tosca is a powerful tale of an unholy bargain between the tragic heroine Floria Tosca and the chief of the Roman police, Baron Scarpia, arguably one of opera’s vilest characters, who will stop at nothing to get his way. Will Tosca give herself to a man she hates to save Cavaradossi, the man she loves? Will she betray everything her lover believes to spare his life? Intrigue, cruelty, and betrayal swirl about the doomed diva in this riveting drama that explores the dark side of human emotion, set to some of Puccini’s most passionate and unforgettable music.

In its first production after the premier in 2013, Doubt will star Christine Brewer as Sister Aloysius, a role she originated. Doubt is based on the 2005 Tony-Award winning play and 2009 Oscar-nominate screenplay by playwright John Patrick Shanley. Douglas J. Cuomo’s innovatively orchestrated score is by turns lush, acerbic, jazz-tinged, and mesmerizing, bringing the multitudinous intricacies of the complex plot to life.

At a Bronx Catholic School in 1964, the progressive Father Flynn enjoys a secure appointment and popularity in the community until Sister James suspects him of carrying on an improper relationship with the school’s first African-American student. Sister Aloysius, the school’s authoritarian principal, sets out to expunge Flynn. Gender politics, race relations and the role of the church, questions about personal responsibility, doubt, right and wrong are all brought to bear here. So much in Doubt is about what is left unsaid and continually running beneath the surface.

7:00 pm Each Friday night before the performance in the Fellowship Gallery.

Join Union Avenue Opera and Glen Bauer, Ph. D. for our Friday Night lecture series. Dr. Bauer will discuss the opera’s historical importance, guide you through the (sometimes convoluted) plot line, and offer a sneak peak of the music to come.